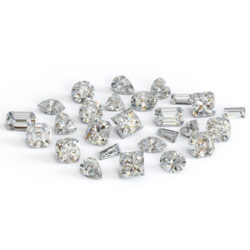 Diamonds are the world’s most sought-after gemstone. And they have been used as ornaments since time immemorial. It is carbon in solid form, where its atoms are arranged in such a way that it gives the diamond its crystal appearance. One of its unique properties is its high dispersion of light, giving it its “shiny” appearance.

Loose diamonds are diamonds that are ready to be set on jewelry.

Diamond’s were found in India, where diamonds were collected from rivers and streams. Historians estimate that diamond trading in India began in the early 4th century BCE. And eventually, Indian diamonds found their way into Western Europe along with other exotic items. Diamonds eventually became a fashion accessory amongst European nobility in the 1400s.

Centuries later in the late 1800s, explorers discovered the first South African diamond deposits. A great timing just when the demand for diamonds skyrocketed. Because of the huge mines found all over the South African continent, entrepreneur Cecil Rhodes saw a business opportunity and established De Beers Consolidated Mines Limited in 1888. And by 1900, because of its mines in South Africa, De Beers was said to control 90% of the global production of diamonds.

Today, diamonds are mostly used as ornaments (jewelry) that dates back to ancient times. Its primary characteristic of dispersion of colors is one of its selling points. Gemologists have devised a method of grading diamonds and other gemstones in the twentieth century. The grading is based on the characteristics unique to each gemstone.

In 1953, the Gemological Institute of America (GIA) developed a globally recognized system to evaluate diamonds. This system is based on four basic descriptors of diamonds, also known as the “four Cs”, the four C’s are carat, cute, clarity, and color.

Carat (ct) pertains to the mass used for measuring gemstones and pearls, where 1ct is equal to 200 milligrams or 0.00643 troy ounces. To accurately measure a diamond’s carat weight, each carat is divided into 100 points. An example of this is when a diamond weighs less than a carat, a 0.50-carat diamond is referred to as a “fifty pointer”. If it weighs more than one carat, a 1.05 carat stone would be “one point oh five carats.”

And with that said the price per carat is higher if the carat weight is higher, this is because larger diamonds are rarer and are more appealing.

Clarity refers to the measure of inclusions in a diamond or internal defects. These inclusions may be foreign material or imperfections like small cracks that have a whitish or cloudy appearance. The size, color, visibility, location, and orientation of these inclusions can affect the diamond’s clarity.

Determining the value of a diamond is a bit complicated, there are many factors to consider. However, one of the most important things to consider is the diamond grading system, the 4 Cs; carat, clarity, color, and cut.

The basic formula for determining a diamond’s price is the weight in carats multiplied by the basic price per carat. Of course, other factors may play its part as well, such as a diamond’s rarity.